Scabies is infectious, and can be transmitted through skin-to-skin contact or having sexual contact with someone who is infected with it. It is more common in nursing homes, nursing facilities, and child care centers. Skin specialists in Delhi provide treatment for scabies by prescribing various creams.

Scabies is a common skin infection caused by tiny mites that burrow into the top layer of the skin and lay eggs which cause small itchy bumps and blisters over the whole body, more in axillae, groins, pubic area & genitals. The burrows may be short, reddish or darkened lines on the skin’s surface, especially around the wrists and between fingers. Scabies is infectious, and can be transmitted through skin-to-skin contact or having sexual contact with someone who is infected with it. It is more common in nursing homes, nursing facilities, and child care centers. Skin specialists in Delhi provide treatment for scabies by prescribing various creams.

Normally, prescribed medicated creams are used to treat scabies infections. Creams are applied all over the body from neck to feet followed by a warm bath in the morning. They are a one-time treatment or can be repeated once in a week. In difficult cases, doctors may prescribe oral meditation to kill the scabies mites. Itching may continue for two weeks or more after treatment starts, but will disappear if you follow the doctors’ instructions. Itching can also be reduced with cool socks and calamine solution.

Acne is a skin condition which occurs when the oil glands attached to the hair follicles are stimulated at the time of puberty. It is a result of excess oil production wherein the skin cells become mature and clog the follicular openings or pores. The clogged follicle enlarges to produce a bump. Common reasons for acne include mental & physical stress, over usage of cosmetics, irregular periods, hormonal imbalance, etc. Dermatologists in Delhi provide effective treatment for acne and help patients to get rid of their acne problem.

In order to cure acne, some self-care steps that you can take:

What NOT to do:

However, if pimples still persist, dermatologist can prescribe stronger medications and discuss other options with you.

Fungal infections are caused by a fungus, mostly found during summer and monsoon months and can affect any part of the body, even fingernails. There are many types of fungal infections that can cause superficial or systemic fungal infections in the body and if they are allowed to grow uncontrollably, chances of developing a possible fungal skin infection increases. This can cause severe discomfort and itching and if it is not cured properly, it can spread fast and develop superimposed bacterial infection. A wide range of medicines are available for external use to clear the red lesions.

Leprosy is a disease which causes nerve damage, muscle weakness and skin sores that get worse with time. It is caused by a bacteria called Mycobacterium leprae and is mildly contagious with a long incubation period making it difficult to identify. Children are more likely to get affected by this disease. The disease develops gradually and results in skin lesions and deformities, mostly affecting the cooler places of the body such as eyes, nose, earlobes, feet, hands and testicles.

Majority of leprosy cases are clinically diagnosed and treated with antibiotics. The type of antibiotic, dosage, and duration of intake is based on the type of disease and as per the recommendation of a medical personnel. It is a curable disease but requires long term drug therapy, generally 6 – 12 months.

For older cases with deformities or disabilities, the following modalities are available:

Vaccine treatment also helps to control the infection along with the drug therapy. Surgery is performed when medical treatment has been completed and negative skin smears. It is carried out only in rare cases and is customized for each patient with an aim to attempt cosmetic improvements and, if possible, to bring back limb function and some neural functions that were lost due to the disease.

Psoriasis is a non-infectious skin condition that produces red, dry plaques of thickened skin. The dry flakes and skin scales occur from the result of the rapid proliferation of skin cells triggered by irregular lymphocytes from the blood. It commonly affects the side of the elbows, knees and scalp, and can be more common in areas of abrasions, trauma and repeat rubbing.

The best treatment is determined by the physician depending on the type of disease, severity, and the total body area involved. In mild cases where only small areas of the body are involved, creams, lotions and sprays can be very effective. For moderate to severe disease which involve much larger areas of the body, systemic (total body treatments such as pills or injections) medications or ultra-violet light treatments are performed.

Vitiligo is a pigmentation disorder wherein cells that make pigment (melanocytes) in the skin are destroyed. Owing to this, white patches start appearing on the skin in different parts of the body. The same patches also appear on the mucous membranes (tissues which line the inner part of the mouth and nose) as well as the retina (inner layer of the eyeball).

People having vitiligo can visually see white patches on their skin which are mostly found in areas where body is exposed to the sun, including hands, feet, arms, face, and lips. The other parts of the body where white patches can appear are the groin and armpits, and near the mouth, nostrils, navel, genitals and rectum.

Vitiligo usually appears in one of the following three patterns:

It is important for patients to understand the nature and unpredictable course of this disease. A well-balanced nutritious diet with right quantity and quality of vitamins and minerals are essential. Avoid emotional stress, physical & chemical damage to skin, and excessive Vitamin C.

Hyper pigmentation is a common, but a harmless condition which results in darkening of the skin and is caused by an excess of melanin, the pigment that determines our skin color. Liver spots or ageing are a common form of hyper pigmentation and are referred by doctors as solar lentigines. They are small, darkened patches which are found in areas frequently exposed to the sun. Melasma or chloasma spots are similar to age spots, but affect larger skin areas and are caused due to hormonal changes. Women who take birth control pills are at higher risk of developing hyper pigmentation owing to the hormonal changes their bodies undergo during pregnancy.

Freckles are small brown spots that can appear anywhere on the body, especially face and arms, and the condition becomes worse when the skin is exposed to sun. Upon exposure, melanin absorbs the energy from the harmful ultraviolet rays of the sun to protect the skin from over exposure. It results in skin tanning, which tends to darken areas that are already Hyper pigmented. Many prescription pigmented creams are also available these days to lighten the skin containing Hydroquinone. Bleaches slow down the production of melanin and fade the darkened skin patches to match normal skin color. Highly affective laser treatments like q-switched ruby laser are available these days which remove pigmentation without leaving scars.

Mole is medically known as a Nevus. Most moles are usually less than 1 cm in size and are formed in childhood or early adult life. They are believed to appear as a result of sun damage and can be raised from the skin or even contain dark hair. Generally brown or black in color, they can appear anywhere on the skin and vary in shapes and sizes. Facial moles are usually formed before birth. Some moles might not appear until late in life, but the ones which appear after age 50 should be taken seriously. They can get darker and pose a risk of developing melanoma cancer.

Only in a few rare cases, babies are born with a condition called congenital nevus which can vary in size from 1 cm to covering the entire body. Large nevi can also differ in size, color, surface texture and hairiness. They can be reddish-brown almost black. Congenital moles grow in proportion to body growth. Their color can stay the same, lighten or darken over time. Surface texture, bleeding, changes in growth, or itching are all matters of concern. Any such change should be medically dealt with if it lasts longer than a few weeks.

Improving one’s cosmetic appearance is also another reason for mole removal, but all surgeries leave some scars. Smaller nevi can be removed by shaving while the larger ones can be cut out directly and the wound edges can be sewn together. Skin doctors in Delhi have a vast experience and ensure complete treatment for moles & nevi. 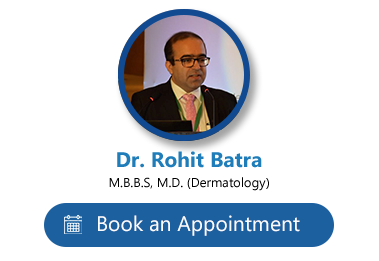